Filed under: Book of the Month., Domestic noir, News, Psychological 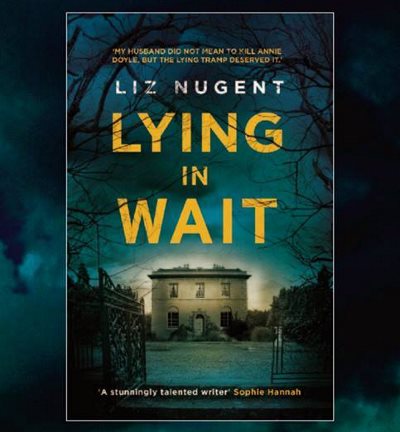 Our July Book of the Month: Lying in Wait.

The plot: has many surprising twists and cliffhangers, right from the opening line. "My husband did not mean to kill Annie Doyle, but the lying tramp deserved it."

The last people who expect to be meeting prostitute and drug addict Annie Doyle are respectable Dublin judge Andrew Fitzsimons and his reclusive wife Lydia. And they certainly don’t plan to kill her and bury her in the grounds of their suburban Georgian mansion, Avalon.

When the police eventually call at their home, their son Laurence realises his father's alibi is a lie. Laurence becomes obsessed with the dead young woman and her family. Meanwhile Annie Doyle's sister Karen believes she may still be alive, and tries to find out what happened.

Why we liked: this is a dark tale of obsession and class snobbery, cleverly paced, with touches of black humour and a good sense of 1980s Dublin. At the heart of it are the selfish, narcissistic manipulator Lydia - an unforgettable monster - and Avalon, her house from which she is inseparable.

Each chapter is narrated in turn by either Lydia, Laurence or Karen. Events often overlap into the next chapter (and the next narrator), giving a very different perspective. Lydia's chapters give glimpses into her madness, and some minor characters are also beautifully portrayed, such as Laurence's ex-girlfriend Helen.

Anything we didn't like? Some readers will find far too many coincidences and some unlikely twists, such as (SPOILER ALERT) when Karen learns Laurence has led her on a wild goose chase around Ireland by forging letters from her dead sister to her family. Instead of seeing this as nasty and twisted, Karen forgives him immediately and takes it as a sign of his love for her.