Peter Harness on adapting Wallander for the BBC 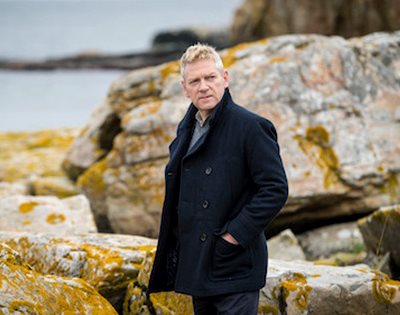 Kenneth Branagh returns tonight as Inspector Kurt Wallander in the first of three new feature-length episodes of the BBC series.

Peter Harness, who wrote all three episodes of the 2012 season and two episodes from this season, talks about the final series and Henning Mankell's novels.

He feels a lot calmer and he feels as though he’s let go of a lot of the stuff we saw him deal with in the first couple of series. He’s moved on to a calmer and more peaceful place in his life.

How is the new series different?

This series does feel different. It looks different because we shot it at a different time and it’s been such a grey, sunless, rainy autumn here. It looks very different to the cornfields in the sun of the first couple of series.

We wouldn’t usually say that we were fortunate to be rained out but it’s brought a very lost, melancholy, cloudy quality to it, which mirrors what he’s going through.

The last two films certainly are the most personal films - you follow him very closely, seeing more into his personal life than ever before.

How is Sweden represented?

I think Wallander is a very clear distillation of the Scandinavian mindset. It’s very philosophical and it doesn’t mind getting quite dark and serious. It’s really about the disjunction between this supposedly perfect set of societies, which are well-functioned, well-running, peaceful societies and the considerable darkness that lurks underneath.

I lived in Sweden for about seven years, prior to working on Wallander. I’ve fallen in love with it after time. The people are quite reserved and they take some time to get to know, but once you have it’s a very easy place to live.

It’s a great place to bring children up, but slightly bi-polar in the sense that the winters are miserable and the people are miserable during this time, but as soon as there’s a ray of sunshine everything just blossoms.

What’s the secret to Wallander’s success?

Another element in its success is the landscape. Scandinavia is very close to us but it’s also very different and we’ve always made full use of the Scandinavian landscape.

I think Wallander really kicked the door open for Nordic noir. It was a very rich field waiting to be explored because there are so many good crime novelists and they all have this trick of exposing the difference between the social exterior, and what goes on underneath.

All of them are also quite political, they’re about something with quite a big underlying theme which people can really get to grips with. They are also very good at telling stories over ten or twelve episodes, which we’ve started to do more in the UK.

Before imported series came in we were not doing that so much - using two, three, six episodes max to tell the story. Now it seems we are more open to that novelistic, deeper storytelling.

What are your thoughts on the series ending?

I hope with this final series we’ve given him the send-off that he deserves. I hope I’ve given him something to be cheerful about and of course there is going to be a lot of misery, angst and soul searching along the way.

As I got to the end of it, in a very perverse way it’s a happy ending. Wallander is in a much better place as a man than we’ve seen him.

I had a very enjoyable working relationship with Henning, and I feel very privileged that I did. He was kind and supportive, and the last time I saw him he was in good spirits and full of fight and bravery. A remarkable man, a fantastic author and a real champion of justice in the world. He’s sadly missed.

In The White Lioness (first broadcast this Sunday 22 May, 9 pm, BBC 1), Wallander is drawn into the case of a missing Swedish national in South Africa while he is at a policing conference in Cape Town.

Back in Sweden for A Lesson in Love, Wallander investigates the murder of a middle-aged woman. As the investigation unravels, Wallander senses he is being followed and targeted by demons he cannot identify.

In The Troubled Man, based on Mankell's final Wallander novel, the detective is in a race against time as he embarks on his final case – the disappearance of Linda’s father-in-law - while confronting the realisation that he is losing his memory.