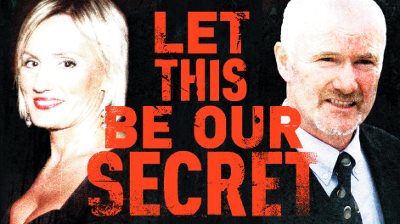 Filming begins in Northern Ireland next month of The Secret, a TV drama based on Deric Henderson's best-selling true-crime book Let This Be Our Secret.

James Nesbitt stars as Colin Howell, a respectable Coleraine dentist who becomes a killer in partnership with his lover, Hazel Buchanan (played by Genevieve O'Reilly).

Major plot spoiler: in 1991 Howell murders his wife and Buchanan's policeman husband by poisoning them with car exhaust fumes, then stage manages it to look like a suicide pact.

The killers fool the police and get away with murder, but their relationship soon sours and they separate. They rebuild their lives, each remarrying and prospering, but can never escape what they have done. As a series of disasters befalls Howell, he finally confesses his crimes to the horrified elders of his church.

Howell implicates Hazel in the killing. Hazel admits involvement but pleads not guilty, claiming she was coerced...

"It was such an unusual story and unique not only for here [in Northern Ireland] but unique full stop," Deric Henderson recalls about covering the case as a reporter.

"It had everything – love, passion, sex, deceit, money, greed. It even had religion but for a change it wasn't about Catholic and Protestant, but rather the Baptist Church and what goes on behind closed doors in it."

Originally from Omagh in County Tyrone, Henderson started out as a reporter on the Tyrone Constitution in 1968, then the Belfast Telegraph from 1973.

In 1980 he became the first Northern Ireland-born reporter for the Press Association, and eventually became the news agency's Ireland editor. He now works as a media consultant.

The four-part drama is being produced for ITV by Hat Trick Productions.