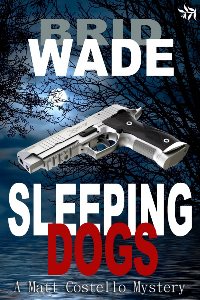 Dublin-born crime fiction writer Bríd Wade's main hero is Matt Costello, a clean-cut, ex-Garda detective turned PI. He is based in Fairview, with offices overlooking the park and an apartment in Clontarf.

Watchers (2013), the first book in the series, revolves around a hunt for a serial killer between Kilkenny and Dublin.

In Sleeping Dogs (2014), a judge is murdered in his home and the murder weapon belongs to a man missing for three years.

In Wild Justice (2014) Costello finds himself thrown into the hunt for a young girl's father and his murderer.


Brid Wade grew up in Dublin's inner city and studied piano at the College of Music in Chatham Street. Later she played keyboards and sang with her sister in a band called The Honeybees.

After raising her family she learned to paint and joined the North Dublin Craftworkers Association. On its behalf she ran the annual Christmas Craft Gift Fair, leading to a career within the exhibition industry.

In 2001 she moved to Kilkenny and began to write. In 2006 she relocated from the city to the village of Inistioge, where she continues to write and paint.