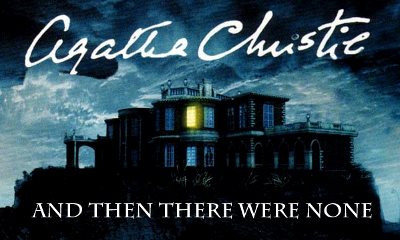 Irish actor Aidan Turner has a busy schedule this month. Besides filming season two of Poldark, he is also in the BBC's forthcoming TV adaptation of Agatha Christie's And Then There Were None.

The book, originally published under the non-PC title Ten Little Niggers, is the biggest selling crime novel of all time. It is widely considered Christie's most complex story, and was recently voted her best novel in an online poll set up by her estate.


1939. Europe is on the brink of war. Ten strangers are invited to an isolated island off the Devon coast. Cut off from the mainland, with their generous hosts Mr and Mrs U.N. Owen mysteriously absent, they are each accused of a terrible crime.

When one of the party dies suddenly, they realise a murderer may be in their midst.

The cast for the BBC's three-part series also includes Charles Dance, Sam Neill, Miranda Richardson, Maeve Dermody, Anna Maxwell Martin and Toby Stephens. Cornwall and London are the main shooting locations of the series, which will be broadcast over Christmas from 26 December onwards.

The production is by London and Belfast-based company Mammoth Screen, whose credits include Poldark, Endeavour, Black Work (with Sheridan Smith) and Agatha Raisin: the Quiche of Death.

The production is part of the recent deal between the BBC and Christie’s estate to bring some of her best-known works to the small screen during the 125th anniversary of her birth.

The BBC has also commissioned Eleven Days, a short story by Kate Mosse about the time when Agatha Christie went missing. It went online yesterday evening.