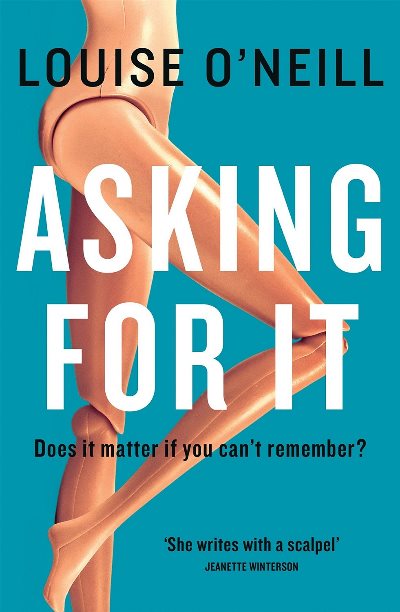 Louise O'Neill's books may be marketed as Teen / Young Adult, but inside the "doll" covers are harrowing themes. Her dystopian debut novel Only Ever Yours (2014) was an immediate publishing sensation

Her second book, Asking For It, is published on 3 September 2015 and advance reviews already suggest that it too will be an award-winning best-seller.

It deals with a gang rape in a small Irish town, and how a young woman and her family and friends are drawn into a social media nightmare that becomes known as "the Ballinatoom case" (echoing recent real-life cases such as "Magaluf Girl" and "Slane Girl").


It's the start of the summer. Emma O'Donovan is 18 years old, beautiful, happy, confident.

One night there's a party. Everyone is there. All eyes are on Emma. The next morning she wakes on the front porch of her house. She can't remember what happened, how she got there or why she's in pain.

But everyone else does. Photos taken at the party show, in explicit detail, what happened to Emma that night...


O'Neill was born in west Cork. She studied English and History at Trinity College Dublin, then took a postgraduate course in Fashion Buying and Management at the Dublin Institute of Technology.

In 2010 she spent a year as an intern for the style director of Elle magazine in New York. On her return to Ireland she began writing Only Ever Yours.


In a world in which baby girls are no longer born naturally, women are bred in schools and trained to please men. At graduation, the most highly rated girls become "companions", trophy wives to rich and powerful men. Those who don't make the cut become concubines or teachers.

Best friends freida and isabel are among the most highly rated girls in their class. But as the intensity of final year takes hold, the pressure to be perfect mounts. isabel starts to self-destruct, putting her beauty - her only asset - in peril.


The futuristic tale was described by Vagenda magazine as "like a mix between Mean Girls and The Handmaid's Tale".

In her freelance journalism and interviews she talks frankly about how the book was partly inspired by her own battle with body image as she struggled with eating disorders.

She now spends her time between Dublin and Clonakilty.