Steve Cavanagh at the BritCrime festival

At the weekend Steve took part in the first BritCrime crime fiction festival on Facebook. Here are some edited highlights from the online session - including his plans for book two...

Helen Giltrow: I loved the way The Defence combines courtroom drama with gung-ho action - even though Eddie himself isn't your conventional action hero. Did you plan that balance of subgenres in advance, or did it develop naturally on the page?


Steve Cavanagh: I think it just came out that way. I knew I wanted to write an exciting type of thriller rather than a procedural. The rest was kind of luck.

Quentin Bates (moderator): Did you have the story or the [Eddie Flynn] character first?


Steve Cavanagh: I had the character first. I was cross examining a witness in a trial, and basically I tricked him into admitting that he was lying. It struck me immediately that lawyers and con-artists share a lot of the same skills and techniques - misdirection, distraction, manipulation, persuasion.

So I wanted to write about a character that allows me to explore that; a lawyer and ex-con artist is perfect and Eddie Flynn was born.

The idea for the story came from me asking myself what was the worst possible situation for a lawyer? And I thought, what if a lawyer had to stand up in court and run a trial with a bomb on his back and his client is holding the detonator. Yeah, that's pretty bad. I then had to figure out how to make that situation worse. 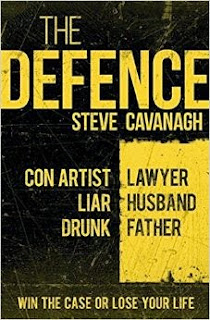 Craig Robertson: How much of you is in Eddie, Steve?


Steve Cavanagh: Well Eddie is better looking and he has more hair. We have a similar courtroom style, we both used to box, we both came from the wrong side of the tracks. He's a fitter, healthier, more corrupt version of me.

Alexandra Sokoloff: Did you want to be an author before you were a lawyer? Or was the drive to write something that came later?


Steve Cavanagh: I wanted to be a screenwriter. I wrote screenplays from the age of 17 - 21. Then stopped. I didn't write anything until four years ago. My mum died suddenly and she was the one who always encouraged me to write - so I thought I'd try a novel. The Defence is the first fiction I've ever written.

Quentin Bates: How did you come to set the book in New York and not somewhere closer to home?


Steve Cavanagh: The problem with a UK or Ireland setting is that we have a dual system of representation - solicitors and barristers.

At the time I honestly didn't think I'd have the skill to write a book with two lead characters. So the US and their single attorney system was ideal. Plus, the idea of writing a thriller where one of the main characters wears a wig and gown didn't fit with the kind of book I wanted to write.

Quentin Bates: As you're a proper lawyer (wig and gown?), what do you make of courtroom dramas that we see on the screen?


Steve Cavanagh: I only wear a wig on weekends. I'm a solicitor Advocate, so I don't have to wear the outfit.

Some TV courtroom dramas are great. Rumpole of the Bailey (books I fell in love with at an early age) is probably the best. North Square on C4, about 20 years ago was excellent. The courtroom scenes in Broadchurch series 2 were laughably awful.

Susan Pola: What about Silk?


Steve Cavanagh: I liked the first two series. The third one got a little weird. The courtroom stuff was OK, for the most part.

Quentin Bates: What's next for Eddie Flynn? Any plans to bring him over this side of the Atlantic or are you keeping him in America?


Steve Cavanagh: Oh Eddie will stay in the States. I think I will move him around a little in later books. I have an idea for a book set in Chicago, and another in the deep south.

For now Eddie is very firmly in New York. As for what's next for Eddie, Book 2 in the series is out on Saint Patrick's Day 2016 and it's called The Plea.

The FBI are on the trail of one of the most respected law firms in Manhattan. They've been involve in a massive fraud for years. One of their major clients just got arrested for murder and the FBI want Eddie to con his way into representing this guy, forcing him to plead guilty in exchange for turning state's evidence on the firm. But Eddie has other ideas...