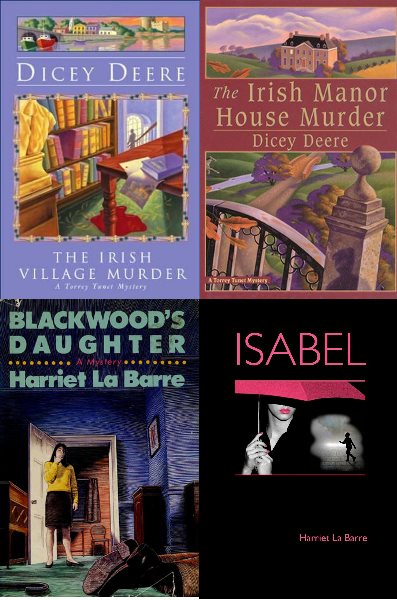 Dicey Deere was the "Irish" nom-de-plume in her later life of Harriet La Barre, the American journalist, travel writer and novelist who died last month at the age of 99.

According to her publishers Macmillan, Dicey Deere lived "in an 18th-century whaler's cottage in Sag Harbor, New York", and in May or October she could usually be found at a bed-and-breakfast in Ireland.

Deere's "Torrey Tunet" cosy murder mystery series is set in Ireland and features a translator sleuth from Boston, Massachusetts. It opens with The Irish Cottage Murder (1999):


Torrey Tunet is working in Dublin when a wealthy American invites her to stay at his fairytale castle near a village called Ballynagh. A stranger is found dead in the swamp surrounding the castle, another death follows, then a priceless heirloom is stolen and Torrey becomes the likely suspect...

In subsequent books in the series - The Irish Manor House Murder (2000). The Irish Cairn Murder (2002) and The Irish Village Murder (2004) - her heroine rents a groundsman's cottage outside Ballynagh in County Wicklow as her "European home base".

Besides writing fiction, La Barre was a columnist and travel editor at Cosmopolitan. She was a good friend of Helen Gurley Brown, the magazine's editor-in-chief. La Barre also wrote articles for Cosmopolitan and other magazines under the pen names E.M.D. Watson (Elementary, My Dear Watson) and T.R. McCoy (The Real McCoy).

Her international travel provided inspiration for her other mysteries, including Stranger in Vienna (1986), The Florentine Win (1988, set in Tuscany), and Blackwood’s Daughter (1992, based in "a quaint English university town").

Her final book, the mystery Isabel (2012), had a character based on her own childhood experiences.