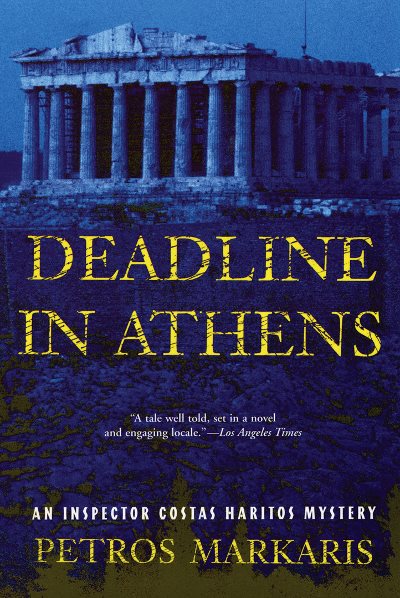 "If you really want to find out what is going in Greece right now. Markaris is your man. And if you love high quality crime fiction he can definitely deliver the goods."
- Lakis Fourouklas in CriminalElement.com

Not greatly known in the English-speaking world, Petros Markaris is the grand master of modern crime fiction in Greece.

His grumpy Athenian police investigator Costas Haritos lives in Athens with his eccentric wife and troublesome daughter. The novels have been praised for their characterisations and social commentary, though sometimes criticised for their bizarre plots.

The first three titles of the series were translated into English as Late-Night News (2005, or Deadline in Athens in the US), Che Committed Suicide (2009) and Zone Defence (2011).

Markaris's subsequent "Crisis Trilogy" deals with crime and corruption in Greece since the debt crisis and features several unusual avengers. In Lixiprothesma Daneia (Overdue Loans, 2010) someone is killing bankers and urging the public not to repay their bank debts.

In I Pairaiosi (The Settlement, 2011) a murderer calling himself the Tax Collector has begun to kill tax evaders in order to scare the rich into paying their taxes and fill the state coffers.


"The murders at the heart of Markaris's new book, I Pairaiosi, or The Settlement, resonate strongly with a mass readership furious at the country's tax-dodging elite whose fecklessness has helped bring Greece to its knees."
- Julian Borger, in the Guardian

The third part of the trilogy, Bread, Education and Liberty (2012), focuses on the Genia tou Politexneiou (the Generation of the Polytechnic) - the young students who helped bring down the military junta in 1973, then rose to power and betrayed all their beliefs in order to hold onto office.

Besides crime novels Markaris has written short stories, plays and film scripts (with Theo Angelopoulos), and translated literary works to Greek and Turkish. He was born in Istanbul in 1937 to an Armenian father and Greek mother. He lived in Germany and Austria for several years and has been based in Athens since 1965.