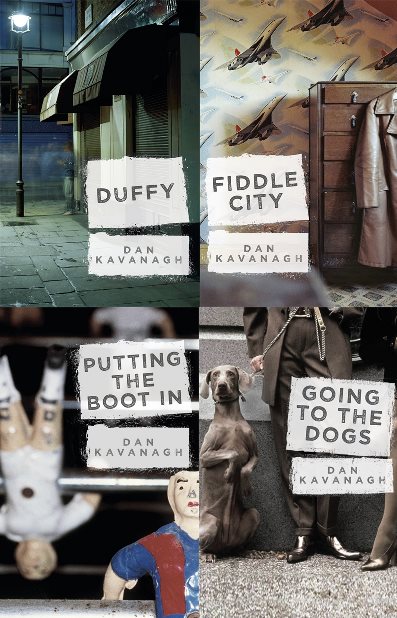 Dan Kavanagh's "Duffy" series of private eye novels from the 1980s is set firmly in the Britain of the time. Duffy is an ex-cop, bisexual at a time when not many PI characters were, and with a phobia of ticking watches, an obsessive attitude to cleanliness and a thing about Tupperware.


"Dan Kavanagh was born in County Sligo in 1946. Having devoted his adolescence to truancy, venery and petty theft, he left home at seventeen and signed on as a deckhand on a Liberian tanker. After jumping ship at Montevideo, he roamed across the Americas taking a variety of jobs: he was a steer-wrestler, a waiter-on-roller-skates at a drive-in eatery in Tucson, and a bouncer in a gay bar in San Francisco. He is currently working in London at jobs he declines to specify, and lives in North Islington."

Barnes rarely talks about his Duffy books and never actively promotes them, unlike say John Banville with his "Benjamin Black" series. In one 1980 interview Barnes describes Dan Kavanagh as "liberating in that you could indulge any fantasies of violence you might have", and says the first Duffy book took nine days to write.

In a much later interview he puts it at ten days, and talks briefly about the differences between the Duffy series and his other books:

Barnes insists the fourth book in the series, Going to the Dogs (1987) is the last. Although it is a country mansion murder/blackmail story, it is far from a traditional "cosy" mystery and is more an ironic homage to Agatha Christie, from the book's opening line onwards: "There was a body in the video library."

The Duffy series has been widely translated, and Penguin published a Duffy Omnibus in 1991. Such is its cult status that last year Orion began republishing all four books, completing the run last May with Going to the Dogs.