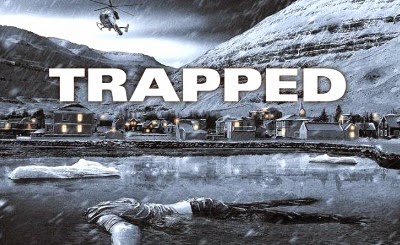 BBC 4 has bought the rights to several more Nordic crime series, and some of the shows may well end up on Irish station TG4 too.

Follow the Money (its English working title) is a Danish eco-crime thriller set in a world of corporate crime.

And Ófærð (Trapped in English) will be the first Icelandic crime drama to air on the BBC; Sky Atlantic's Fortitude - which was filmed around Reyðarfjörður in east Iceland - doesn't count.

Trapped is a 10-parter featuring Danish actor Bjarne Henriksen (devastated father Theis in the first season of The Killing) and Icelandic-American actor Ólafur Darri Ólafsson (from True Detective). Update 01/02/2016: the series will begin screening on BBC Four on 13 February 2016 at 9 pm.


A mutilated body is found in the water shortly after a passenger ferry from Denmark arrives at a remote Icelandic town. When a powerful blizzard hits town, the only road in or out becomes impassable.


Follow the Money comes from DR, producers of The Killing, Borgen and The Legacy. Filming only started last month, with a cast that includes Thomas Bo Larsen and Natalie Wolfsberg Madueño.


When a dead body is found near a local wind farm, police detective Mads is assigned to the job. He refuses to believe it's an accident, and uncovers a web of shady dealings surrounding the energy company.

Yet the BBC's latest Nordic import won't be a crime series per se but an eight-part historical saga set against Denmark's disastrous war with Prussia. 1864 is due to begin screening on BBC 4 later this month. Its cast includes Sidse Babett Knudsen - the prime minister in Borgen.

Like BBC 4, Irish-language station TG4 has shown a significant amount of Nordic drama in recent years, including Borgen, Arne Dahl and The Bridge (season two is currently running).