Filed under: Author profiles, Historical, News, Police procedurals
A leading Sinn Fein official in Dublin has secured a two-book deal with Quercus after her debut crime novel was shortlisted for the 2015 Richard and Judy "Search for a Bestseller" competition. 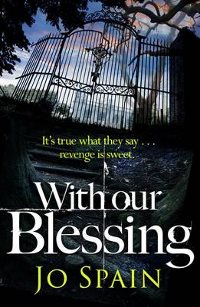 Jo Spain's With Our Blessing (due to be published in September 2015) is the first in a series of contemporary police procedurals featuring DI Tom Reynolds, and looks back to the Magdalene Laundries scandal.


1975. A baby, minutes old, is forcibly taken from its devastated mother.

2010. The body of an elderly woman - tortured to death - is found in a Dublin public park in the depths of winter.

Detective Inspector Tom Reynolds is convinced the murder is linked to historical events in the notorious Magdalene Laundries.

Jo Spain is the pen name of Joanne Spain, who has been a senior Sinn Féin economic adviser in the Oireachtas since 2007, and is a member of the party's Ard Chomhairle.

She provides the party's pre-Budget submissions and budgetary responses, and  is also vice chairperson of IntertradeIreland, which promotes cross-Border trade.

Spain grew up in Belcamp in Dublin, and graduated with a politics and philosophy degree at Trinity College Dublin in 2002. After college she was the party's press officer for two years, and worked on its newspaper An Phoblacht for four years.

She was an unsuccessful candidate for the party in the 2006 general election in the Dublin Mid-West constituency.