Kevin McCarthy is the author of the "Sean O'Keefe mystery" series of historical crime novels. It begins with Peeler (2010), a war story and murder mystery set in west Cork in 1920 during Ireland's War of Independence. 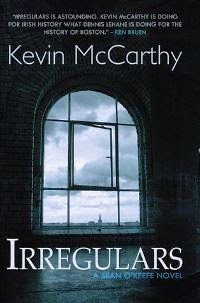 The body of a young woman is found brutally murdered on a windswept hillside; a scrapboard sign covering her mutilated body reads 'TRATOR'. Traitor.

Acting Sergeant Séan O'Keefe of the Royal Irish Constabulary, a wounded veteran of the first World War, is assigned to investigate, aided by sinister detectives sent from Dublin Castle to ensure he finds the "right" killer as far as the Crown is concerned.

Meanwhile the IRA begins its own murder investigation, assigning young Volunteer Liam Farrell to the task of finding a killer it cannot allow to be one of its own.

The sequel, Irregulars (2013), moves the action forward to the 1922 Irish Civil War. Disillusioned and demobbed from the RIC, O'Keefe hits the drink until he becomes embroiled in a missing person case in Dublin. The book was shortlisted for the 2013 Ireland AM Crime Fiction Book of the Year.

McCarthy's short story "Twenty-five and Out" appeared in Down These Green Streets: Irish Crime Writing in the 21st Century (2011).

McCarthy was born in Suffolk in England, where his father was stationed with the US Air Force. He served in the Air Force himself before studying at Boston College and University College Dublin.

In 2005 he was awarded the Fingal County Council Arts Bursary for Fiction Writing. He lives with his family in north County Dublin near Gormanston in County Meath.