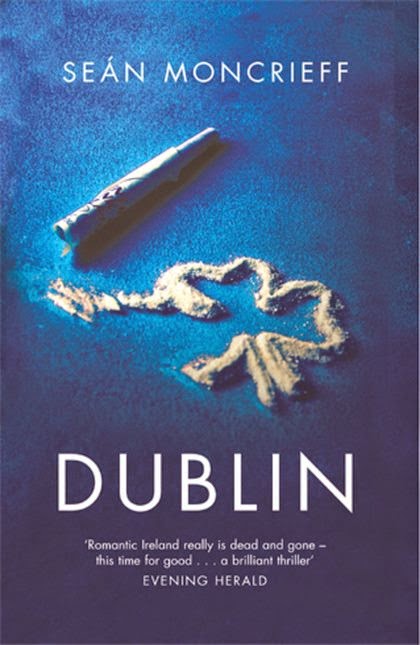 Journalist and broadcaster Seán Moncrieff's first novel, Dublin (2001), is set firmly in the Celtic Tiger boom in the run-up to the millennium. It is possibly the first crime novel to feature the Millennium Spire in O'Connell Street (though in real life the construction of the monument was delayed until January 2003).

Dublin was mucky and vulgar. Like a tourist who gets drunk and wakes up with a huge tattoo. This is what it's like for you: your name is Simon Dilion. You're 35. You're a failure. Too hungover to go to work, too lazy to get a new job, too keen to blame everyone else: your mad father, your estranged wife, your so-called friends. Blame them. Blame Dublin. You'd rather do a few lines of coke, but there's a beautiful French woman you can't remember meeting, cops banging on the door asking about a dead woman you don't know, Russian gangsters asking questions you can't answer. Murders all over the city; bombs in O'Connell Street. And it's got nothing to do with you. Except that it's all your fault.

Moncrieff's other novels include The History of Things  (2007) - an unconventional crime novel set at the end of the economic boom - and The Angel of the Streetlamps (2012), which intertwines five connecting stories during the recession.

His non-fiction titles include Stark Raving Rulers: Twenty Minor Despots Of The Twenty-First Century (2004) and God, A Users' Guide (2006)

Moncrieff was born in London to a mother from County Mayo and a father from Edinburgh. When he was 12  his family moved to Ballinasloe in County Galway. He studied journalism in Dublin and  did a degree in English and Philosophy in University College Dublin (UCD).