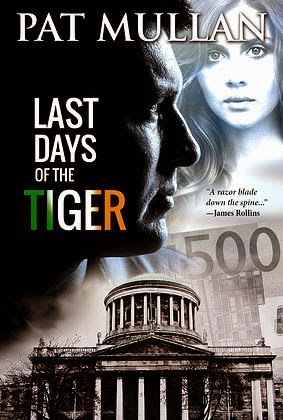 In Pat Mullan's novel Last Days of the Tiger (2011), burnt-out lawyer Ed Burke flees New York, a failed marriage, and a high-pressure career as a criminal lawyer and returns home to Dublin at the height of the Celtic Tiger boom.

Burke's new job is to represent a prominent developer in a tribunal investigating property rezoning, and he is drawn into an affair with a glamorous old flame, now the wife of a corrupt and powerful political leader. Then she is murdered in his bed...

In the follow-up Creatures of Habit (2011) Burke returns to Ireland to investigate the death of a boy at a Catholic boarding school; the boy's father cannot believe the authorities' assertion that his son died accidentally.

Mullan's first novel, The Circle of Sodom (2002), was an American based political thriller, followed by the conspiracy tale Blood Red Square (2005).

He was born in Ireland and has lived in England and North America. He is a graduate of St Columb's College, Northwestern University and the State University of New York. Formerly a banker, he now lives in Connemara, in the west of Ireland.

He is Ireland Chair of International Thriller Writers, Inc. and is a member of Mystery Writers of America.

He has published articles, poetry and short stories in a wide range of magazines, has two collections of poetry online.