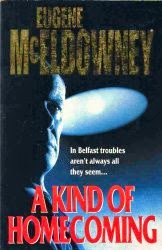 Megarry is tough, irascible, confused, bullying, hard-nosed and compassionate by turns, the kind of cop who clears his throat in the morning with a shot of Bushmills. Most of the action is set around Belfast, though The Sad Case of Harpo Higgins (1996) moves to Dublin around the start of the ceasefire in Northern Ireland, as Megarry recovers from a heart attack and helps to investigate a drugs-related killing.

McEldowney was born in Belfast and educated at Queen's University. He was a journalist with The Irish Times and is now retired and living in north County Dublin.

He began to write fiction in 1994 with the first Megarry novel, A Kind of Homecoming. His non-crime fiction books include Stella's Story (2002) and The Faloorie Man (1999).