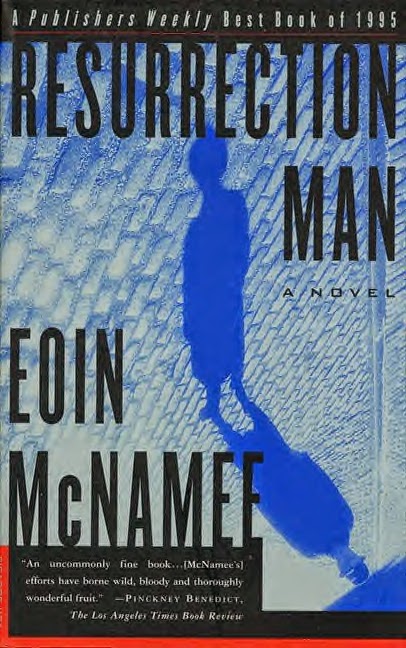 Although Eoin McNamee writes about crimes, he isn’t a traditional crime writer per se. He fictionalises real-life events, such as the Troubles in Northern Ireland, using the real names of those involved.

His novels include Resurrection Man (1994), which detailed the bloodletting of the Shankill Butchers, a Loyalist gang in 1970s Belfast. Its film version, for which he wrote the script, was released in 1998.

"When I got to the end of Resurrection Man, I changed all the names. But it almost felt like a dishonest thing to do, as everyone knew who it was about, so when I did Blue Tango, I just felt it was the right thing to use the real names, because that was the story you were telling."

The Blue Tango (2002) was longlisted for the Booker Prize. It follows the aftermath of the savage murder of a judge's daughter in 1952, one of the greatest miscarriages of justice in recent Irish history.

Completing the trilogy are Orchid Blue (2010) and Blue is the Night (2015). The latter took the  Kerry Group Irish Novel of the Year Award at the 2015 Listowel Writers' Week. The €15,000 award is the highest monetary prize awarded for a book published by an Irish author.

The Ultras (2005) is set in Northern Ireland inthe 1970s, and takes its cue from the true-life story of Special Forces Operative Captain Robert Nairac before his disappearance in the "covert war".

McNamee has also written a series under the pseudonym John Creed, featuring the character of intelligence officer Jack Valentine.

He also wrote the script for I Want You (1998), a film directed by Michael Winterbottom, and episodes of the Irish police drama series Red Rock, as well as an episode of TG4's Irish-language crime drama An Bronntanas.

Originally from Kilkeel in County Down, he now lives in Sligo. Having studied law at university, he is suitably versed on the legalities behind writing "faction" and how to avoid the potholes other writers may have fallen into.

He is currently working on a novel about the snooker player Alex "Hurricane" Higgins.