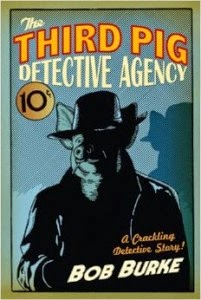 It has been described as "the most whimsical hardboiled detective novel ever written", "nursery rhyme noir" and "a wonderful pastiche of noir-ish detective stories like The Maltese Falcon". The book's design includes coffee stains on some pages and a vintage looking cover.

Harry is one of a kind. "Columbo, Kojak, Miss Marple, Sam Spade and Sherlock Holmes were all great detectives but Harry has something that none of them can boast – trotters, a curly tail and a snout for trouble."

In February 20145 an imprint of HarperCollins UK, The Friday Project, published an omnibus edition of the three Herry Pig novels, The Third Pig Detective Agency: The Complete Casebook.

Burke is originally from Ennis, County Clare, and lives "in a small village with no pub just outside Limerick, with his wife and three sons". He has spent over twenty years working with computers.