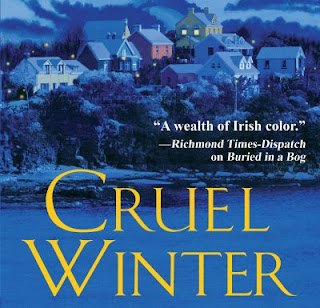 American writer Sheila Connolly's "County Cork Mystery" series revolves around Maura Donovan, a Bostonian who goes to Ireland after the death of her grandmother, her last surviving relative, and decides to stay. She later inherits a pub in the town of Leap from a close friend of her grandmother.

The fifth novel in the cosy mystery series, Cruel Winter, is published later this month.

Snow is a rarity in Maura Donovan's small village in County Cork, Ireland, so she wasn't sure what to expect when a major snowstorm rolled in around Sullivan's pub. But now she's stranded in a bar full of patrons, and a suspected killer from a long-ago murder.

Sheila Connolly has been an art history teacher and investment banker, worked as a staff member on two statewide political campaigns, been a fundraiser for several non-profit organisations, and has managed her own genealogical research consultancy.

She began writing in 2001, and wrote her first mystery series for Berkley Prime Crime under the name Sarah Atwell. Through a Glass, Deadly (2008), the first book in the Tucson-set series, was nominated for an Agatha Award for Best First Novel. It was followed by Pane of Death (2008) and Snake in the Glass (2009).

She is now a full-time writer, having penned more than 30 titles, including the Museum Mysteries, the Orchard Mysteries, and the County Cork Mysteries, in addition to paranormal romance and romantic suspense, and Reunion with Death, a traditional mystery set in Tuscany, as well as short stories in various anthologies.

She lives in Massachusetts with her family and says she visits Ireland as often as she can.