Major new study on crime fiction and the state 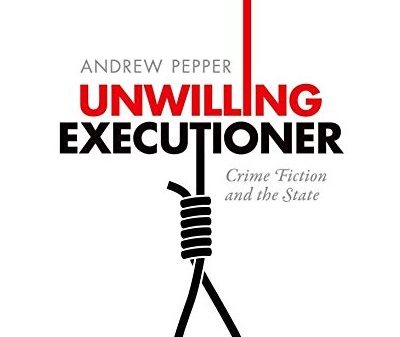 His new study Unwilling Executioner: Crime Fiction and the State (Oxford University Press) describes itself as "the first book to explore the significance of crime fiction's relationship to the state".

What gives crime fiction its distinctive shape and form? What makes it such a compelling vehicle of social and political critique? Unwilling Executioner argues that the answer lies in the emerging genre's complex and intimate relationship with the bureaucratic state and modern capitalism, and the contradictions that ensue once the state assumes control of the criminal justice system.

From its roots in the tales of criminality circulated widely in Paris and London in the early 18th century, this book examines the extraordinary richness, diversity and complexity of the genre's subsequent thematizations of crime and policing.

It offers new ways of reading established crime novelists like Gaboriau, Doyle, Hammett, and Simenon, beyond their national contexts and an impulse to characterize their work as either straightforwardly 'radical' or 'conservative'.

It also argues for the centrality of writers like Defoe, Gay, Godwin, Vidocq, Morrison, and more recently Manchette, Himes, and Sjöwall and Wahlöö to a project where crime and policing are rooted, and shown to be rooted, in the social and economic conditions of their time.

With David Schmid he has also co-edited Globalization and the State in Contemporary Crime Fiction: A World of Crime (Palgrave, 2016), which expands and extends this focus in the contemporary era.

Pepper's debut novel, The Last Days Of Newgate (2006), the first in his "Pyke Mystery Series", was shortlisted for the CWA New Blood Award.