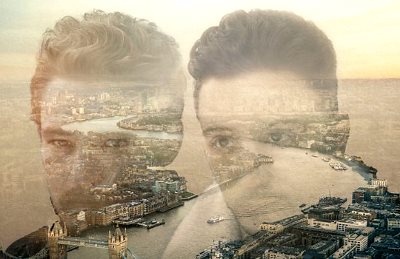 Bestselling author and screenwriter Anthony Horowitz, creator of Foyle's War, talks about New Blood, his new series that begins on BBC 1 on 9 June at 9 pm.


Six years after a drug trial in India goes horribly wrong, one of the guinea pigs, Mark Henson, is found dead. Young PC Arrash "Rash" Sayyad is sure it’s murder and is offered a trainee Detective Constable position.

How would you describe New Blood?

Anthony Horowitz: It’s a young, fast-paced adventure series – and I’d like to think that there’s nothing on television quite like it at the moment. At heart it’s a bromance but we’ve managed to film a fantastic amount of action.

We’re describing the real world of 21st-century London but in a way that isn’t as grim and as dark as some programmes we’ve seen recently.

What was the inspiration behind the series?

After 15 years of the Second World War in Foyle’s War, I wanted to do something more modern and a little faster on its feet. I wondered if it was possible to look at the crime / investigative genre and find a way to shake it up a bit.

Inspiration also came in part from having two sons in their mid twenties and seeing how difficult it is these days for young people to get their foot on the ladder of careers, finding somewhere to live, building a life - particularly in London.

Why did you want to look at the Y generation?

So many TV shows seem to focus on middle-aged men and women with their various problems that I thought it would be more fun to have two heroes who were in their mid-twenties.

For a long time I’ve been interested in the so-called "Y generation", this generation of young people who are demonstrably less well off than the generation above them.

I loved the idea that I’d have really fresh investigators – the new blood of the title – who when they aren’t investigating crime are trying to find somewhere to live in London, clinging onto their jobs, trying to pay off their tuition fees and so I came up with Rash and Stefan.

Who are Stefan and Rash?

Rash is Iranian British and Stefan is Polish British, so from the very start they’re slightly outside the establishment. I see them as the powerless fighting the powerful: the organisations they’re fighting are huge – pharmaceutical companies, major charities, banks, politicians. They come up against major conspiracies.

Rash and Stefan are idealistic and fun to be with but at the end of the day they’re not perfect heroes. They get drunk, they argue, they make mistakes but with a mixture of luck and tenacity they get there in the end.

We thought we might have to cheat with the casting but we really lucked out finding two actors, Mark Strepan and Ben Tavassoli, who are the real thing. One is half Polish and one is half Iranian so they’re exactly what I was looking for.

What do their characters bring to New Blood?

Their real strength is the way they play off each other. We saw a lot of talented young actors but what mattered most was the chemistry between them and with Mark and Ben that was evident from the start. It’s almost like creating a boy band - although the one thing they haven’t done so far is sing!

As far as I know, the SFO has never been dramatized on the screen and I have to say that they’ve been fantastically supportive. The work they do, fighting white-collar crime, is hugely important and yet it really is a David and Goliath struggle.

It was important to me that Rash and Stefan should work in quite separate organisations – Stefan in the SFO, Rash in the police. It gives the stories a completely different shape.

How important was it to you to set it in London?

I knew it would be a challenge filming in London – apart from anything else, it’s incredibly expensive. But I couldn’t see it taking place anywhere else and I’m glad that producer Jill Green agreed.

London is such an exciting city right now – and we filmed all over the city, getting some amazing backgrounds. In fact, I’d say that London is a third character in the series.