Next 'Stefan Gillespie' novel on the way 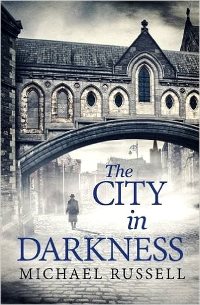 The City in Darkness by Michael Russell is due to be published in May 2016, and is the third in his series of "Stefan Gillespie" historical detective novels.

Europe is in the "Phoney War". In Ireland, Detective Inspector Stefan Gillespie is keeping tabs on Irishmen joining the British Forces and closing down a Gate Theatre production of a play that has "offended" the German ambassador. He is all the more uncomfortable because Kate O’Donnell now works at the Gate.

Just before Christmas the IRA raids the military arsenal in the Phoenix Park. DI Gillespie is soon convinced that his boss, Superintendent Gregory, knew about the raid and turned a blind eye.

After a rural postman goes missing, Gillespie realises that his own wife’s death was not an accident but murder. The pursuit of the killer takes him to Portugal, Spain and England as the Battle of Britain begins to hot up in the summer skies.