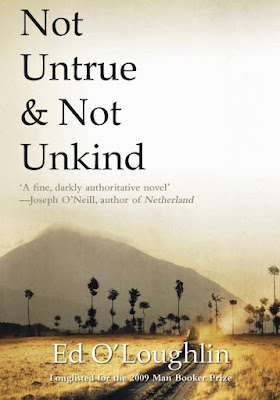 Irish author Ed O’Loughlin drew on his experiences as a foreign correspondent for his debut novel, Not Untrue and Not Unkind (2009).

The book was long-listed for the Man Booker. It follows the friendships, rivalries and betrayals among a group of journalists and photographers covering Africa’s wars.


Old Cartwright has been the office bully for decades, so few at the newspaper mourn him when he's found dead.

A burnt-out younger colleague in his Dublin office, former foreign correspondent Owen Simmons, discovers a dossier on Cartwright’s desk. It includes a photograph that brings him back to a dusty road in Africa and to the woman he once loved.

O'Loughlin's second novel, Toploader (2011), is a comical satire about drone attacks and the War on Terror:


Spying inside the Embargoed Zone is an expensive and  risky business, and Agent Cobra wants his wages in full. But his down-at-heel spymaster can only offer payment in kind – and the first thing he finds in an unattended storeroom.

Both men are sucked into the mysterious Toploader project, a race to retrieve a deadly secret from inside the world’s first – and best – walled-off terrorist entity.

O’Loughlin has also published All You Can Eat (2013), a darkly comic novella about an Irish government fighting a zombie outbreak.

He was born in Toronto and spent his early childhood in Canada and Manchester, after which the family settled near Kildare town in Ireland, his father's homeland. He studied English at Trinity College Dublin and took a postgraduate course in journalism at Dublin City University.

After freelancing he became the Africa correspondent of the Irish Times and was based in Johannesburg. His first African assignment was in the refugee camps in Congo after the Rwandan massacre.

After his contract expired he stayed on and freelanced for a number of Dublin newspapers. He was Middle East correspondent for the Sydney Morning Herald and The Age of Melbourne, and took a break from journalism in 2008 to concentrate on his fiction writing.

He currently lives in Dublin with his wife - journalist Nuala Haughey - and their two children.