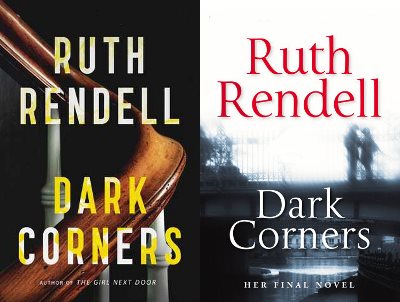 English crime fiction legends PD James and Ruth Rendell died within months of each other earlier this year, but Rendell managed to complete Dark Corners shortly before becoming incapacitated.
Published this month, it's a standalone thriller with nightmare lodgers, blackmail and murder.


When his father dies, Carl Martin inherits a house in a rich and trendy London neighborhood. Carl needs cash, so mistake number one was to rent the upstairs to the first person he interviews, Dermot McKinnon.

Mistake number two was keeping his father's bizarre collection of homeopathic "cures" in the medicine cabinet, including a stash of controversial diet pills.

Mistake number three was selling 50 of those pills to a friend, who is then found dead.

Rendell's first novel, From Doon With Death, was published in 1964 and introduced readers to her best-known creation, Chief Inspector Reginald Wexford.

Her 60 bestselling novels include police procedurals, 28 standalone psychological mysteries, and a third series of 14 crime novels under the pseudonym Barbara Vine.