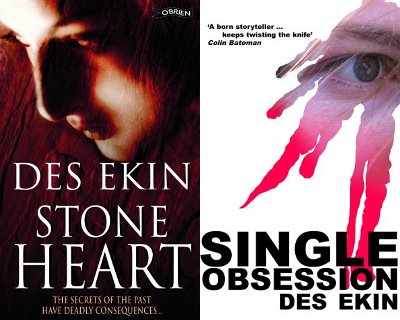 
Tara Ross moves back to the peaceful village of Claremoon to establish an online newspaper, leaving behind a failed relationship and the rat race of the Dublin media.

The police say the brutal murder of Ann Kennedy is an open and shut case: the knife-wielding attacker is the dead woman's son, Fergal Kennedy. But Tara is unconvinced and there's an added complication - she and Fergal are lovers.

Single Obsession (2001) is set in Dublin and in a village called Passage North.


A corrupt politician is accused of murdering several women, whose only apparent connection is that they all had red hair and had children out of wedlock. Meanwhile a psychiatrist and her young son are being threatened. Leading reporter Hunter makes the connections and puts his career on the line.

Ekin has also written two acclaimed historical accounts. The Last Armada: Siege of 100 Days: Kinsale 1601 (2014), and The Stolen Village: Baltimore and the Barbary Pirates (2008), which was shortlisted for the Argosy Irish Non-fiction Book of the Year, and for Book of the Decade in the Bord Gáis Energy Irish Book Awards 2010.

He was born in County Down, and began his career as a cub reporter in the Newtownards Chronicle. He spent several years covering the Troubles in Northern Ireland, and rose to become Deputy Editor of the Belfast Sunday News before moving to his current home in Dublin.

He worked as a reporter, columnist, assistant editor and political correspondent for the Sunday World until 2012.