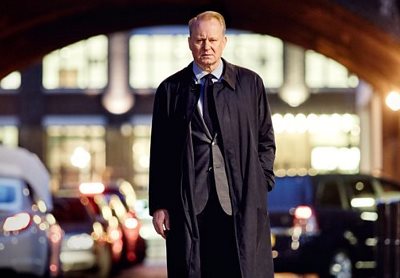 London-based police officer John River has a mental disorder. He doesn't just hear voices - he actually sees crime victims, who pop up and have conversations with him. But they’re not like ghosts - they are still his own creations.

Who is John River and where do we join him in the story?

When you meet River in the first episode, he’s in a car with his colleague Stevie [Nicola Walker of Last Tango in Halifax, Luther and Scott and Bailey] outside a fast-food drive-through joint. That’s where it starts, but his colleague who was probably closest to him has been murdered three weeks earlier and we learn he is working on the case of solving her murder, as well as all other cases that pop up during his journey.

Very often the victims of murder cases show up and have discussions with him, and try to help him solve the crime; ‘manifests’ as we call them.

As an audience, we see those victims, or ‘manifests’, as real living people in a room, but of course it’s not the victim that is helping him solve the crime because the victim is dead.

We’re not talking about ghosts here; he produces these dialogues himself. They are an internal discussion almost like his own kind of checklist as he investigates their lives and the moments leading to their death.

The audience see these characters and get used to them being around, and should be happy (or scared in some instances) to see them when they show up even if you know they’re dead. It’s always interesting when they do: it sort of jars reality, but in an intriguing way.

What’s the effect of the manifests on River’s life and relationships?

Well, he’s a police officer, and he’s supposed to have a record that shows no psychological problems whatsoever and he’s of course hiding this, but it’s hard when he suddenly starts talking to somebody who isn’t there.

Some of those situations become quite comical and some are tragic. His behaviour is of course bizarre sometimes to the people around him, but the audience can see who he’s talking to so the audience are hopefully on his side.

Are the manifests serving a purpose that's helping or assisting River?

They serve a purpose for River. First of all he's a very lonely man and they are his friends, like children have imaginary friends, but in his case it's pathological.

They serve the purpose that an inner dialogue can serve for you of course, but they also terrorise him because some of them represent the darkest sides of him.

Have you enjoyed working with Abi Morgan's writing and bringing that to life?

I took the job for her writing, because it doesn't look like anything else. Her writing is not linear. It's more filled with odd impulses.

It throws you from one thought to another thought in a less organised way, and to me that resembles life much more than a lot of the writing you get which is extremely structured and polished and is by the book of ‘How to Write a Screenplay’.

I find I’m looking for what I can do with the words because the poetry is there in her writing. Her dialogue often takes the character and repositions them so often in a short dialogue that it becomes very interesting. Very different, but very interesting for the actors to work with.

How does River differ from so many other cop shows out there?

We’re taking some risks in the way we do it and that makes it very interesting. Without risk, it’s not worthwhile is it?

It’s a pretty highly strung and tense show because the psychological stakes are high, and the personal stakes for a lot of the people are also high. It’s a mixture of the danger of illegal actions and psychological vulnerability.

How do you practically do it, acting with the manifests?

We usually shoot the scene first with the actor who plays the manifest and then we shoot the same scene exactly the same way but without anybody there. It looks fantastic, because you walk around, you gesture and talk to somebody that isn’t there and it’s quite interesting visually.

To me, I’m the kind of actor who doesn’t want to act towards a mark beside the camera; I want the real actor to be there, and I feed so much off the other actors.

So it’s very unnatural to me to do it, but since we always do the scene with the actor first I have a very clear memory and then we do it with the real actor saying the lines, so I still get a response and it becomes more like playing a game of ping pong.