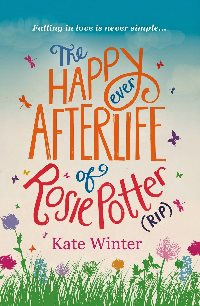 Although Kate Winter's debut novel, The Happy Ever Afterlife of Rosie Potter (RIP), is being packaged and marketed as "chick lit", she describes it as a blend of genres, "a romantic, supernatural, Irish, black-comedy whodunnit".


When Rosie Potter wakes up one morning with what she assumes is the world's worst hangover, the last thing she expects is to discover that she's actually dead.

Many other secrets are buried in the quiet Irish village of Ballycarragh, where nobody is as innocent as they appear. Aided by the unlikeliest of allies, Rosie discovers that life after death isn't all it's cracked up to be...

The Sligo-based author says she wrote the story while "skint and unemployed". It was originally self-published online in 2013, then taken up by publisher Little Brown.

'My father the spy'

Kate's father Gordon Winter has had a colourful career, including a prison term for burglary, involvement with arms smuggling, crime reporting, and working as a spy for the South African secret service in the 1960s.

After publishing Inside B.O.S.S.: South Africa's Secret Police (Penguin, 1981), he began a new life with his family in Ireland. They settled in Sligo, and during Kate's childhood travelled around southern Europe and Morocco in a camper van.

She took a degree in media studies and journalism at the University of Ulster. Before fiction writing she worked in local journalism, copywriting and theatre. The latter included a year spent as a "cabaret vampire'' in Australia, a dancing-singing-waitressing job in a pink castle called Dracula's.

She now lives in Sligo town.