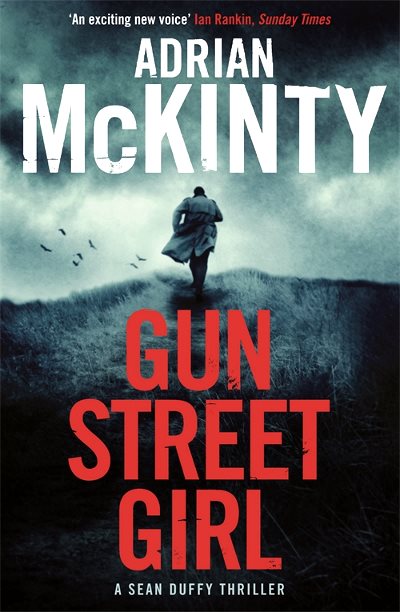 The time: November 1985. Northern Ireland is in turmoil as the UK and Irish governments sign the Anglo-Irish Agreement.

The place: mostly Carrickfergus / Belfast, though there are scenes in Oxford ("Morse World") with the Thames Valley police.

The central character: DI Sean Duffy, a Catholic officer in a predominantly Protestant police force.  He is a maverick outsider, well read, bohemian, pockets drugs from the Evidence Room and downs a large vodka gimlet almost every time he arrives home.


Duffy struggles to solve a brutal double murder and suicide. Did Michael Kelly really shoot his parents at point blank then jump off a cliff? Can Duffy believe the suicide note?

Meanwhile some guided missiles have gone missing from the Shorts factory, and Duffy's old friend Kate Albright turns up at his doorstep offering him a job in MI5.

The pace: constantly switching, from "straight" detective work to riot duty and the inevitable big shootout at the end.

Why we liked? Duffy is a complex, engaging character - a lippy peeler with an increasingly destructive streak. The humour and banter takes place in a highly charged atmosphere where chaos and death are always just around the corner.

Anything we didn't like? This is highly intelligent historical fiction, rich in detail, yet occasionally the details stretch incredulity or are plain wrong.

But McKinty is playing with the genre. At times Duffy doesn't know whether he is a standard cop, sleuth or gung-ho action hero. He is a Catholic policeman who has somehow managed to live in a working-class Loyalist housing estate for almost a decade so far, a few doors down from the local paramilitary thug.

On the other hand, Duffy is ahead of his time. The series has a retrospective knowingness (not unlike Life On Mars), especially about the "bigger picture" and "long game". Cameo appearances by real-life figures such as Gerry Adams and (SPOILER) a thinly disguised Oliver North add to the fun.

Any other MAJOR SPOILER ALERTS? Since the death of Matty McBride in book #3 the team has been supplemented by a smart new young officer, Alexander Lawson, who shows much potential for the series.

By the end of the book Duffy has yet another girlfriend and it's 18 months later. But as the Troubles approach their end game - and with the surprise loss of his MI5 link at the end of this book - it's difficult to see where the series can take us next.

The publishers: Serpent's Tail, available as a paperback, eBook and audiobook.