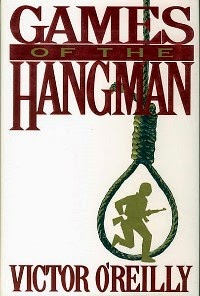 Irish-born author Victor O'Reilly's series of thrillers feature Hugo Fitzduane, a sort of modern Anglo-Irish knight. Fitzduane is a former soldier and war photographer who lives on an ancestral island estate (complete with Norman keep) off the west coast of Ireland.


When Fitzduane finds a hanged body on his island, it's ruled a suicide. But when the body of a terrorist is found with the same strange tattoo, Fitzduane is plunged into a firestorm of violence across Europe as he tries to expose the link.

In Rules Of The Hunt (aka Games of Vengeance, 1994) a group of  group of Japanese assassins is out for revenge against Fitzduane. He takes the fight back to them in Tokyo.

The Devil's Footprint (1997) moves the action to North America. Using his counter-terrorism skills, Fitzduane becomes involved with a breakaway Mexican province, even though they have a weapon that can kill in huge numbers.

The fourth book in the series, Blood Of Generations, goes to Toulouse in France and focuses on a massacre by an SS Division in 1944 and neo-Nazi forces half a century later.

O'Reilly also writes books under the pen name Lewis Adair, including the thriller Satan’s Smile about a terrorist attack on the Lawrence Livermore nuclear lab across the bay from San Francisco.

He grew up in Bray and was educated at Trinity College Dublin. After working for Doyle Dane Bernbach Advertising and United Biscuits he set up Addmaster Corporation UK. He worked for the US Army from 1993 to 2006.

Besides writing fiction he continues to be a military consultant and lecturer. He is based in Seattle in the US.