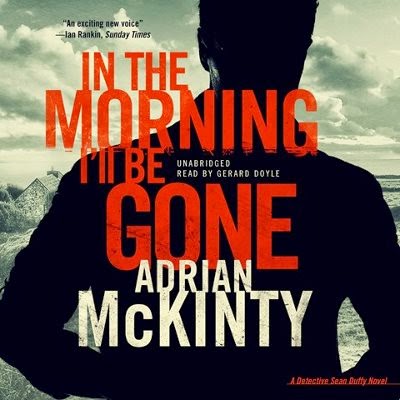 Irish actor Gerard Doyle's reading of In the Morning I'll Be Gone has been shortlisted for the prestigious Audies. It's the third in Adrian McKinty's series featuring troubled RUC man Sean Duffy in 1980s Northern Ireland.

The audiobook has reached the final six in the Thriller/Suspense category of the Audio Publishers Association's annual awards. This year's winners will be announced on 28 May.

New York based actor Doyle has read most of McKinty’s novels for Blackstone Audiobooks, and scooped the 2007 Audie in the same category for his narration of McKinty's Dead Yard.


McKinty says he and Doyle have long Skype conversations before each book is recorded: "Gerard likes to know what accents I want for my characters and wants me to say various words in my native vernacular so that he can replicate them in his performance."

Doyle does many accents - listen out for his Gerry Adams in the Sean Duffy series - and has extensive audiobook credits, from works by Jeffrey Archer and Gerald Seymour to Val McDermid and Tony Parsons. Here he talks about his work with American author Christopher Paolini.

He won the first of many AudioFile Earphones Awards for his first audiobook, A Star Called Henry by Roddy Doyle (no relation).

His theatrical career includes productions of The Crucible, The Tempest, The Importance of Being Earnest, and Fiddler on the Roof. He has also appeared on TV, including New York Undercover and Law & Order.