Late winter, and New York city is shrouded in fog. Mary lives alone in a rambling brownstone on Manhattan’s Lower East Side. After menacing phone calls and fears that she is being stalked, she contacts old friend Sheila to move in until the situation is resolved. The police investigate and initially focus on respondents to a dating site Mary has recently joined. She suspects her ex-husband, with whom she is still obsessed. 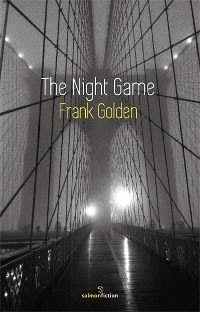 The Night Game began life as a screenplay for a film that was never made. But the story continued to intrigue Golden, "partly because of the issues it raised in relation to borderline and profound personality disorders. It introduced a degree of unreliability which is always attractive to a writer, and a fusion of interior and outer worlds."


Golden is a poet, novelist, visual artist and screenwriter. His previous novel, The Two Women of Aganatz (1994), was published by Wolfhound and his latest book of poetry is In Daily Accord (2008).

He teaches creative writing at the Burren College of Art, and has been based in the Burren in County Clare for more than two decades. During the 1980s he lived in Spain, New York and Kuwait.