Award winning writer Sofi Oksanen has won more awards than any other contemporary Finnish author. Her latest novel When the Doves Disappeared will be published in Ireland and the UK next month.

It's a story of resistance and collaboration in Estonia during and after the second World War, when the country was occupied by both the Soviet Red Army (twice) and Germany.


1941: In Communist-ruled, war-ravaged Estonia, two men have deserted the Red Army: Roland, a fiercely principled freedom fighter, and his slippery cousin Edgar. When the Germans arrive, Roland goes into hiding; Edgar abandons his unhappy wife, Juudit, and takes on a new identity as a loyal supporter of the Nazi regime.

1963: Estonia is again under Communist control, independence even further out of reach behind the Iron Curtain. Edgar is now a Soviet apparatchik, desperate to hide the secrets of his past and stay close to those in power. But his fate remains entangled with Roland’s, and with Juudit, who may hold the key to uncovering the truth. 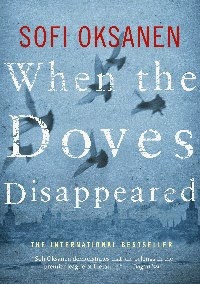 The book's title refers to how German soldiers snared and ate pigeons in Estonia's capital Tallinn during the war, and to the divergent twin fates of those who collaborated and those who resisted.

Here Oksanen talks about her earlier book Purge (2010) and When the Doves Disappeared and why she tells the history of nations through the stories of individuals:


"Art and literature is a way to make extreme historic events much more approachable and understandable. There are not too many readers who are eagerly waiting to read a thousand-page volume of Estonian history for example."

Born in 1977, she studied literature at the University of Jyväskylä and University of Helsinki and drama at the Finnish Theatre Academy in Helsinki. Her father is Finnish and her mother grew up in Estonia during the Soviet period, emigrating to Finland in the 1970s.

Oksanen has published four novels and two plays. In 2009 she received an award from Helsinki Pride for her activism on behalf of LGBT people in Estonia, Latvia, Lithuania and Russia.