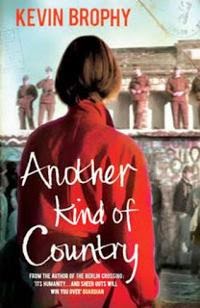 Galway-based author Kevin Brophy's work includes two Cold War thrillers rooted in East Germany in the days before and after the fall of the Berlin Wall.


Santiago, 1973: Rosa lives a privileged life among the ruling elite. When violence erupts with the Pinochet coup, her socialist parents are the first to be taken. Forced to flee across the Andes, she finds herself rescued by a Stasi spy, and escapes behind the Iron Curtain to Germany.


East Berlin, 1989: Englishman Patrick Miller has crossed over and is working at the Secretariat for Socialist Correctness in Publishing. Dragged into a dangerous, cynical world of shady dealings on both sides of the Wall, Patrick doesn't know what he believes in anymore. Until he meets Rosa...

Brophy grew up in Renmore, and on leaving college at University College Galway he worked as a teacher in Ireland and Britain. His career has also included stints as a postman, barman and businessman, and teaching English in Poland and Germany.


"I got to like the Germans, I felt they’re more upfront than the Irish are, I don’t think they bullshit as much as we do, they don’t fabricate things like we do, or embellish them, they’re more honest than we are I think." - Kevin Brophy

He has published several other novels including Almost Heaven: A Love that Could Not Be (1997), as well as the memoir Walking the Line; Scenes from an Army Childhood (1994) and In The Company of Wolves (1995), which chronicles the 1998/1999 season following Wolverhampton Wanderers Football Club.


"Irish memoirist Kevin Brophy's approach is fresh and psychologically intriguing, with a heart-wrenching twist in the narrative, sensitively drawn relationships, and worthwhile insights into the painful condition of both pre- and post-reunification Germany." - review by Kapka Kassabova of The Berlin Crossing in the Guardian