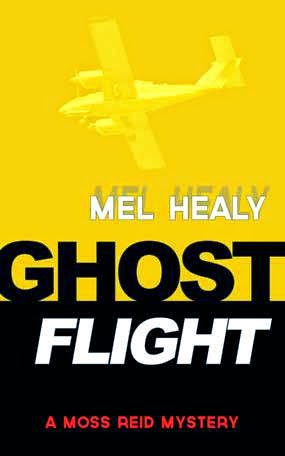 Dublin writer Mel Healy's "Moss Reid" series revolves around a private eye with generally run-of-the-mill cases, whose priorities in life are to "eat, drink and investigate (in that order)".

The series, set mainly around Stoneybatter  in Dublin, begins with Another Case in Cowtown (2013) as Reid goes undercover in a top restaurant.

His third crime novel Ghost Flight (2014) switches between Ireland and the south of France. Shortly before the economic crash in 2008, three Irish businessmen disappear in a light aircraft off the west coast of Ireland. Six years later, an Irish woman spots one of them in the Languedoc, then she, too, goes missing.

Healy's novels all come with a health warning: do not read while hungry.
He has worked in a butchers' shop in Dublin, and spent a brief spell in a Paris restaurant as a pastry chef. He studied forensic science at the University of Strathclyde "but never had the guts to finish the course".

See also: Mossreid.blogspot.com - a blog about places featured in the "Moss Reid" series