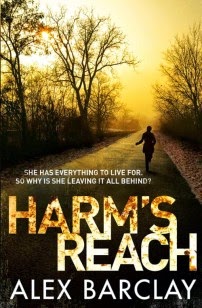 Eve "Alex" Barclay is a Dublin-born crime fiction writer. She won the Ireland AM Crime Fiction Award at the Irish Book Awards for her third novel, Blood Runs Cold (2008).

This marked the beginning of the Special Agent Ren Bryce series, based in Colorado. Since then, the bipolar female FBI agent has featured in Time of Death, Blood Loss, Harm's Reach and the latest instalment, Killing Ways (2015).


"With Killing Ways, I de-stabilised Ren’s entire world. It’s like a cruel tablecloth trick; characters whose places I’ve carefully set out over the past four books are now in the air and you don’t know where they’ll land, or whether they’ll break in the fall." - Alex Barclay, writing in the Irish Times

Barclay grew up in Bayside in north Dublin. She studied journalism at college, and worked as a journalist and copywriter before writing her first novel, Darkhouse (2006), a Sunday Times Top Ten bestseller featuring NYPD detective Joe Lucchesi. This was followed by a sequel, The Caller (2008).

She moved to Castletownbere in west Cork in 2007.