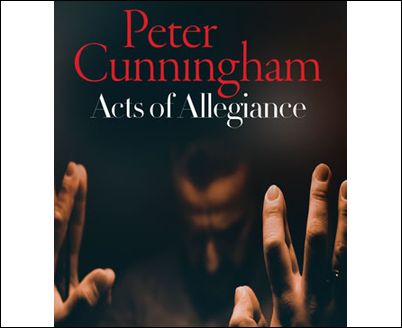 Peter Cunningham's latest novel Acts of Allegiance (2017) is an espionage thriller set at the start of the Troubles in Northern Ireland and includes characters based on real people such as politician Charlie Haughey.

Paris, May 1969. Irish diplomat Marty Ransom is summoned to meet Charles J. Haughey. The Irish Minister for Finance wants a go-between with the new IRA faction in the North: he knows a key player is Marty’s cousin Ignatius. He has no idea Marty is reporting to MI5 in Dublin. As the deadly endgame draws near, Marty must choose between the past and all he holds dear.

John Banville has described Acts of Allegiance as "a wonderful brew of a book about politics, family, violence, love, betrayal – life, in other words".


Peter Cunningham comes from Waterford. He was educated at Glenstal Abbey School and University College Dublin. He worked as an accountant and a commodities trader until 1986, when his first novel, Noble Lord, was published under the pseudonym Peter Lauder.

Following the death in 1990 of his eldest son, also Peter, he began to write the "Monument" series of contemporary novels based on life in Waterford.

Consequences of the Heart (1998) was shortlisted for the Listowel Writers Prize; The Sea and the Silence (2007) won the Prix de l’Europe. The Taoiseach (2003) was a best seller set in the world of Irish politics, and Capital Sins (2010) was a satire set in the economic meltdown.

Sister Caravaggio (2014), conceived with the late Maeve Binchy, and written as a collaborative novel with four other well-known Irish writers, was also a best seller.