Blast from the past: Shaun Herron 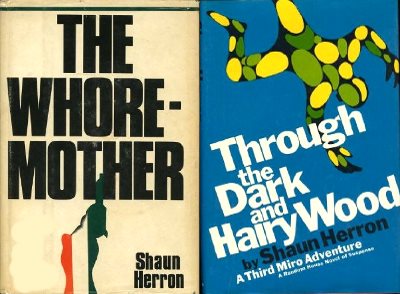 He was nearing retirement when he began to write a series of spy thrillers featuring a secret serviceman called Miro: Miro (1967), The Miro Papers (1970), and Through the Dark and Hairy Wood (1972).

The latter is set in Northern Ireland, and several of his other crime thrillers are also set in the early stages of the Northern Ireland conflict in the 1970s, including The Whore Mother (1973), about a man who wants to flee the IRA.

The Bird in Last Year's Nest (1974), generally regarded as his  best novel, was base on his experience during the Spanish Civil War.

Born in Carrickfergus in County Antrim, he studied at Queen's University Belfast, but left to join a Basque battalion that fought alongside the International Brigade in the Spanish Civil War. He was wounded in the leg and returned to Britain.

At Edinburgh University he had a brief and unhappy marriage, then was ordained a Congregationalist minister in 1940. He joined up and worked in intelligence during World War II, until he was wounded in the neck with the Green Howards in France.

After the war he moved to Canada and served as a United Church minister in Weyburn, Saskatchewan. He wrote for the Winnipeg Free Press from 1965 to 1976, and also lectured in Canadian universities. On retirement from the Free Press he divided his time between Spain and Schull in County Cork.