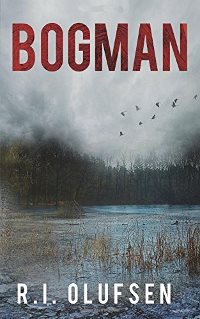 Broadcaster and author Roisin McAuley has taken the suitably Scandinavian-sounding pen name RI Olufsen for her new thriller Bogman (2015). It's the first in a series featuring Danish detective Tobias Lange.


When a mummified foot, a pile of bones and a split skull are discovered in a Danish bog in East Jutland, the remains turn out to be a young man beaten to death about two decades ago.

Chief Inspector Tobias Lange finds himself on the trail of eco-warriors, Sami protesters safeguarding reindeer rights, and a disaffected young woman estranged from her family.

Then another incomplete set of human bones turns up, then another...


McAuley says she was inspired by Seamus Heaney's poem about the Tollund man, and she visited Denmark before starting to write the police procedural.

On her blog she also explains that McAuley is an anglicisation of her name in Irish, Róisín Nic (daughter of) Amlaoibh. "I've always understood it to be a Viking name. Amlaoibh is from the old Norse - Olaf." Hence the Olufsen pseudonym.

Her first novel under her own name, Singing Bird (2004), was a romance. Her second, Meeting Point (2007), features a CSI investigator who comes face-to-face with a cold-case murder suspect in the South of France and finds herself violently attracted to him.

Two more romances followed, Finding Home (2009) and French Secrets (2011). Besides her five novels she has also written a guide to Irish golf courses.

She went on to report for the Irish Times, Examiner and London Times before returning to BBC Northern Ireland as a reporter on Spotlight. The producer who hired her was Bernard Wiggins, who later left the station to become bestselling novelist Bernard Cornwell, author of the Sharpe books and Starbuck Chronicles.

McAuley moved to England in 1984 to work for the BBC, ITV and Channel 4. In 2014 she returned to live in Belfast. She co-presents Radio Ulster's Sunday Sequence show.