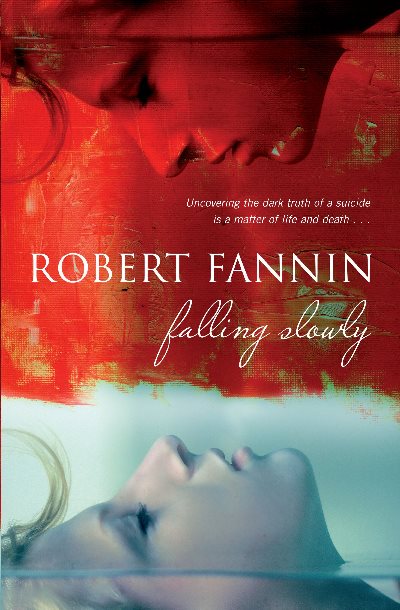 Desmond Doyle is devastated when he finds his girlfriend Daphne dead in the bath with her wrists cut. When inconsistencies are found with how suicide wounds would be inflicted he is briefly arrested for murder.

On his release he returns to his job curating original art for a new restaurant. When he meets artist Gina Harding, he is deeply disturbed by her recent paintings, with their likenesses of his girlfriend's death scene.

Falling Slowly is Fannin's second novel. His first, Shooting the Moon (2009),was an adventure/romance. He has also written stage plays including In a Different Light, radio plays including Waiting for Concorde (broadcast by BBC Radio 4 in 2003) and the 10-minute short Egg, screened by BBC Wales in 1998.

As a freelance journalist he has been published in the Guardian and the London Times and many leading yachting magazines.


Robert Fannin was born in Dublin in 1954. His father was the cartoonist Bob Fannin, who worked in the Evening Herald and Irish Field; Bob was also a keen yachtsman, and a member of the Irish Admiral's Cup team in the 1970s.

As Robert explained to journalist Sue Leonard, he left school at 15 after being expelled from St Paul’s College, Raheny, and followed his father to sea.

Robert worked as a fisherman and later as a professional skipper, delivering yachts worldwide and working a skipper on chartered boats. He has also worked as a cartoonist, illustrator, radio presenter, sign writer,

He became a mature student in his early fifties, studying Drama and English at the University of the West of England in Bristol, where he lives with his family.