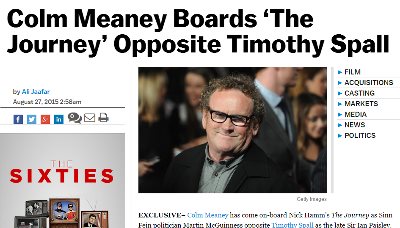 Deadline.com is reporting that Colm Meaney will play Sinn Fein's Martin McGuinness in The Journey, which starts shooting in Northern Ireland and Scotland next month.

The film is a fictional account of the changing relationship between McGuinness and the DUP's firebrand leader Ian Paisley (played by Timothy Spall) as the former sworn enemies come together in a new government after the Northern Ireland Peace Agreement.

Meaney gave his support to McGuinness when the Derry politician ran for the presidency of Ireland in 2011.