Blast from the past: 'Bogmail'

Filed under: Author profiles, Murder mystery
Patrick McGinley's Bogmail (1978) is now regarded as a classic of modern Irish literature. It wasn't so widely respected when it first came out.

The Donegal Democrat described the novel as:


"a horrific concoction of filth ... a picture of life in Donegal that is revolting in the extreme ... virtually pornography veneered with an assumption of literary value ... a shocking libel on the people of Donegal".

A short version of the quote appears on the cover of New Island's 2013 edition of the book.

The story often verges on the surreal, and McGinley cites Flann O'Brien as among his strongest literary influences.


In a small Irish village near Donegal, publican and former priest Roarty kills his barman with (SPOILER ALERT) a copy of the Encyclopaedia Brittanica. He buries the body in a bog, thinking he has committed the perfect murder.

Soon after, Roarty starts getting blackmail letters. A severed foot follows. Matters quickly spiral out of his control. 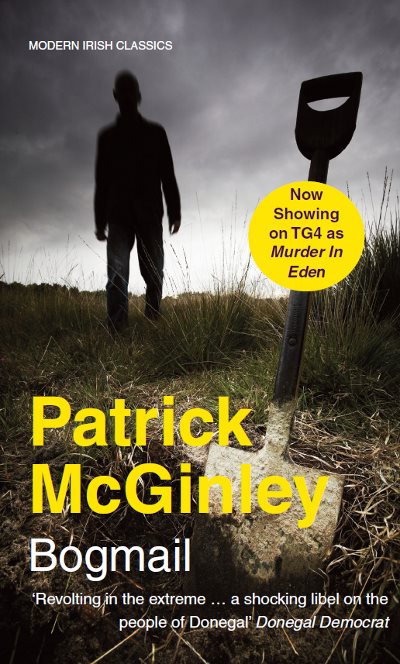 Bogmail was adapted by the BBC as the three-part series Murder in Eden (1991), featuring Ian Bannen, Peter Firth, Frankie McCafferty and Alun Armstrong. It was filmed in McGinley’s home village of Glencolmcille.

Due to one particular sex scene the film was dubbed by locals as "My Left Tit" - My Left Foot was playing in cinemas at the time.


McGinley was born in County Donegal in 1937. He was educated at St Enda's College, Galway, and University College Galway. After teaching in Ireland, he settled in England in the 1960s and worked as a publisher and author.

He now lives in Kent. He has also published a memoir of his Donegal childhood, That Unearthly Valley (2011).