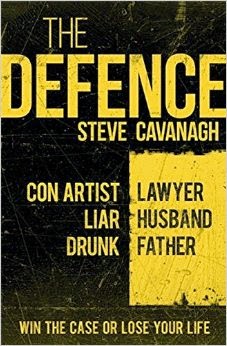 Belfast writer Steve Cavanagh has been revealing some key reasons why he picked a New York setting rather than an Irish one for his new series of legal thrillers featuring former con artist turned trial lawyer Eddie Flynn.

As he explains to Matt Craig on his Reader Dad blog this month:

"One thing that stands out to me is that I’m mainly influenced by American crime writers and books set in the US. Michael Connelly is a major influence and I would’ve read mostly US based fiction – although in recent years there has been more of a balance between US, UK and Irish fiction.

"The other major factor was that I wanted to write a legal thriller and that creates its own difficulties if you set that book in Northern Ireland. Largely because we have a dual system of representation; if you find yourself in court you will have a solicitor and a barrister representing you. The solicitor does most of the early court appearances and prepares the case for trial and the barrister performs the role of the trial advocate.

"At the time I didn’t feel confident about creating two lead characters – particularly when one character, the barrister, would inevitably be the one doing all the cool courtroom scenes. It didn’t seem balanced to me.

"So I felt setting the book in the US solved that problem as attorneys in America perform both roles and I could concentrate on a single lead character to focus the story."

Steve Cavanagh's novel The Defence is published on 12 March 2015.