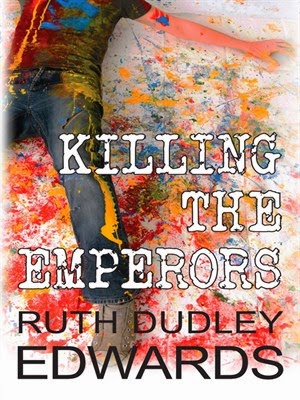 Ruth Dudley Edwards is a crime novelist, historian, broadcaster and columnist with the Sunday Independent newspaper.

Her crime novels poke fun at establishments. The Anglo-Irish Murders (2001), her ninth crime novel, is a satire on the peace process, her tenth, Carnage on the Committee (2011), sets its sights on literary London.

Murdering Americans (2012), set in the academic world, was next and her latest is Killing the Emperors (2012), a satire set in the world of modern art. It was shortlisted for two awards at CrimeFest 2013.

"I fell into crime writing by accident (an unexpected offer), intended to write straight detection but couldn’t stop the farce and the jokes. What has happened unintentionally is that my novels have turned into (affectionate) satire on the British establishment. I was born and educated in Ireland until I was 21, after which I went to England, became a graduate student (in fifteenth-century ecclesiastical relations) at the University of Cambridge, moved to London where I was a telecommunications executive and then a civil servant in the Department of Industry, until in 1979 I became a freelance writer."

She has worked as an academic, teacher, marketing executive and civil servant, and has been a freelance journalist since 1979. In the 1970s she wrote her first (non-fiction) book, An Atlas of Irish History. Patrick Pearse: the Triumph of Failure won the NUI Prize for Historical Research in 1978.

She now lives in London.