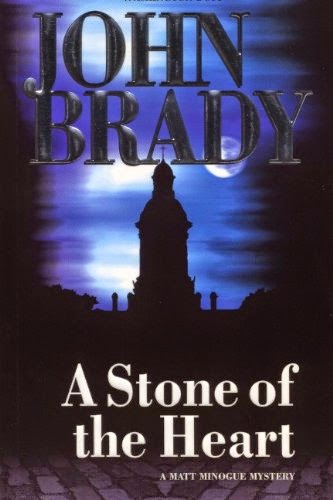 John Brady's 10-book "Matt Minogue Mystery" series beings with A Stone in the Heart (1988), as DS Matthew (Matt) Minogue returns to duty and the Murder Squad after nearly being killed when the British Ambassador is assassinated.

This is all treated as back story as Minogue investigates the murder of a Trinity College student.

While not strictly speaking Northern Noir, the early books in the series are set in the late 1980s and the stories are infused with the ongoing tensions of the Northern conflict.

"Much about Minogue would fool you into believing that he’s a plodding, suburban husband so typical of his generation and rural origins," Brady says. "This suits him just fine: he capitalizes on being taken for a gobshite."


Brady's website suggests that as Minogue passes retirement age, he will move on to a spin-off series featuring Minogue's younger partner Tommy Malone.

"In Malone’s first outing 'Haywire', an  imprisoned Dublin gangster Tony Gannon wants Malone to help locate his missing son. Malone finds out that family is a trapdoor as much as it is a sanctuary."


Brady is a native of Dublin. He studied at Trinity College Dublin and emigrated to Canada when he was 20. He worked there as a bank official, an RCMP clerical officer and a teacher. He now divides his time between Ireland and Canada.